Thanks For Coming to Learn More About Me!

I had the privilege to grow up in a Christian home. I was taught of Jesus and His free gift of salvation from the time I was an infant. I repented of my sin and gave my life to Christ as a young lady.

My mother, Kay Ice, and father, Dr. Dennis Ice, who was an instrumental part of the beginning of the Christian school movement in the early 1970's and is now the executive director of the Indiana Association of Christian Schools and headmaster of Heritage Hall Christian School, believed strongly that Christian education was a Biblical mandate.

As a result, I had the privilege to have been given a quality Christian education from kindergarten to 12th grade. 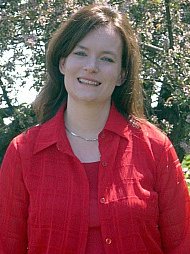 I graduated from one of the best Christian schools in Indiana, Heritage Hall Christian School of Muncie, Indiana, in 1991. After graduation, I attended Maranatha Baptist Bible College in Watertown, Wisconsin, where I met my husband, Michael De Leon.

We minister together as he Pastors the Lighthouse Baptist Church in New Concord, Ohio.

We now have eight beautiful children from 2-15 years of age that I have the privilege to homeschool.

It all started because two people fell in love! 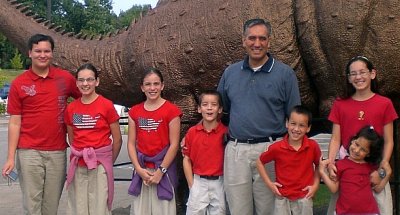 How We Started Homeschooling

In the spring of 2002, at the age of 5, Autumn my oldest daughter had her first sign of problems. She had pain and diarrhea for a week. We took her to her pediatrician, who said she probably had a virus and an irritated colon. She was fine after one week.

In July, Autumn had another episode of pain, bleeding and diarrhea. This time they did a stool culture - results were negative. She grew better on her own.

Again in September of 2002, she had the same symptoms, but this time she did not get any better. Our pediatrician sent us to Children's Hospital in Columbus. The colonoscopy showed her entire large intestine ulcerated!

Autumn continued to struggle it seemed every six months. We started out with colozal and prednisone. In November in 2004, Autumn again made a slow decent in her sickness. She was having 20-25 bloody stools a day and 5-6 at night. Again, she was admitted to Children's. For another six months, she felt pretty good, but again she became ill.

In August of 2005, after much prayer and counsel we radically changed our diet.

By November, it looked as if she was really doing well. Within one week, she again was in pain and bleeding. She lost 3 lbs in one week. Autumn was admitted in Dec of 2005. She was given a high dose of steroids. We came home Christmas Eve.

Then we had to make a decision for our precious child that no parent ever wants to do. On March 10th, 2006 she had her large intestine removed and a j pouch created.

This was a 7 hour surgery. We were in and out of the hospital for over 6 months. Her second surgery was June 8, 2006. Four days later on June, 12, 2006, she had a third surgery (emergency) for a complete bowel obstruction.

Our children were attending a wonderful Christian about 25 minutes from our home. After Autumn surgery, we decided it would be best to bring her and all of the rest of the children home for me to try my hand at homeschooling.

I loved homeschooling my children!

My philosophy of Education

I love homeschooling our children. I love being their teacher and their mom. I believe strongly in Christian Education. I believe it is the parent's responsibility to give their children a Christian education.

I am Pro Christian education. Whether you decide to educate your children through the Christian school or home school, the emphasis is on a Biblical world view. In other words, the education my children get from the subject of History to the subject of science is centered on the Bible.

Why I Started Pros and Cons of Homeschooling

As Pros and Cons of Homeschooling is still in its infancy, more information is written every week.

Continue to check us out for more great tip and helps on homeschooling. Return from About Me to Pros and Cons of Homeschooling